Both Ben Rowe of Aperture 64 and Robin G. of Captivate Me suggested I try black and white to give my out-of-focus image of a Burmese monk new life.

Since I rarely use black and white this ended up to be quite the challenge for me. The black and white photos that I love have super-sharp almost surrealistic detail, and this image didn’t qualify in any way.

Initially I edited it in the free app Photoshop Express. I liked the Memory version best especially after I added a Film Emulsion ‘Edge’. 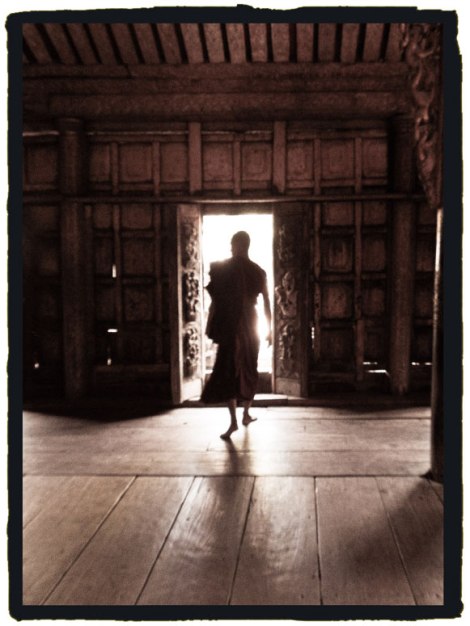 The resulting image reminded me of a bunch of old photos of my family that I had scanned. Almost all of them were out of focus, not to mention torn, age-spotted, faded and with all the character that comes with time.

To ‘fix’ those photos I experimented with overlaying textures. My thought was that this technique might possibly work for this photo of a monk as well. (Links to the textures are on : Weekly Photo Challenge: Creating Nostalgia with Textures.)

My first attempt at a texture overlay via the ‘Blending Mode’ Multiply didn’t work as this particular photo was so dark that the texture didn’t show up.

I then went into Photoshop’s Black and White ‘Image Adjustment’, and lightened up the photo, which in this case meant lightening up the reds and the yellows. The first time I did this I ticked the ‘Tint’ button as well, as the default setting turns the photo into a great sepia tone. Later I went back and changed it into plain old black and white as the texture added the sepia tones in a more natural way.

Then I pasted the texture onto the monk and tried a variety of ‘Blending Modes’ until I found Hard Light. 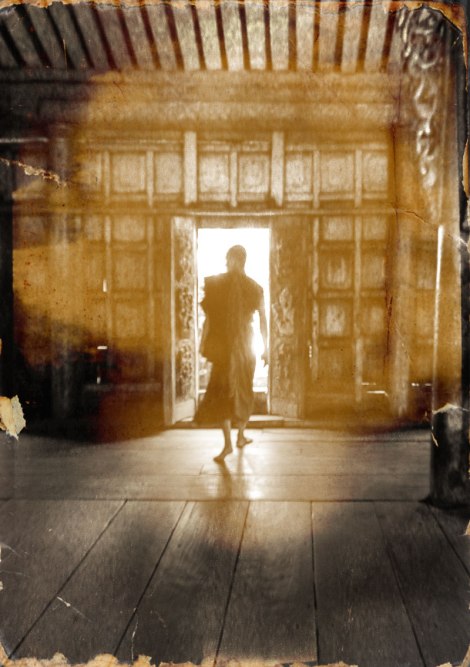 15 responses to “December Week 2: One Four Challenge of a Burmese Monk”