The trouble with taking food photos while travelling is that many restaurants are too dark with weird sulphuric lighting that makes the food look extremely unappetizing in a photo.

There are ways around this such as

After adjusting the colour a fair bit (including using ‘Replace Colour’) I ended up with this dish which still doesn’t look as good as it tasted!

Text courtesy of Snapseed and a bit of lightening and hopefully you get the feel for the meal.

Pilek is a restaurant in Amsterdam where the future is now, and the world’s housing crisis is solved by everyone living in shipping containers.

But the lighting was awful and I forgot to fiddle with the white balance so I ended up with awful photos that no amount of colour adjusting worked. I tried running all the shots in my post through various apps. But even double-apped this meat plate didn’t make the cut into my post – sometimes meat just doesn’t look good no matter what you do to it. 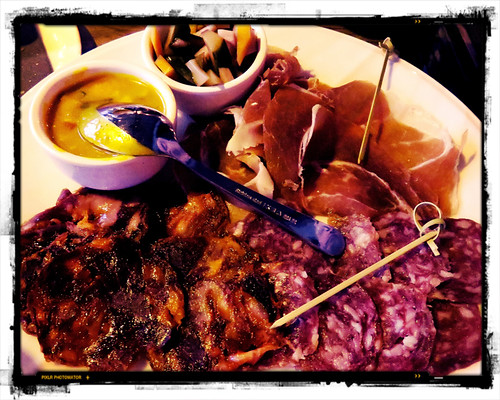 Possibly triple-apped works though, maybe. What do you think?

This was their strange little salad made of artichokes, almonds, fennel, mixed herbs and romesco sauce run though more or less the same apps.

These chicken wing tapas in a hole-in-the-wall Spanish bar were delicious. But the photo doesn’t show it.

Here it is again, photo apped to death – it looks good but doesn’t really look like chicken wings. Adding graphic titles adds the suggestive power of words to the image. The best app I’ve found to do this quickly is Snapseed.

More of K’lee and Dale’s Cosmic Challenge: Foodie for a Day.

One thought on “Fixing Bad Restaurant Lighting in Food Photography”