It’s tulip time again, and this month I wanted to design some book covers based on the 1637 tulip craze in Holland that resulted in the collapse of the world’s first financial bubble.

The original is a ‘Black Parrot’ tulip out in my garden, actually more of a deep purple with black edges.

Here I have transformed it into a cover for ‘The Black Tulip‘ by Alexandre Dumas in the photo app Stackables using a slightly brightened up version of its ‘Asylum’ formula. This book was about the search for the almost mythical black tulip back in the 1600s and I wanted to try and capture that time period.

Dumas wasn’t too up on his horticulture making several critical mistakes involving the creation of a black tulip, most notably when he described the colour as a ‘dark nut-brown’. He also mixed up the planting times. However, I guess there wasn’t any Google to research your book back in the 1850s so I forgive him.

This original photo of the ‘Lavender Ruffle’ tulip at La Conner’s Tulip Town is slightly out of focus.

Here I have transformed it into a cover for ‘Tulip Fever’ in the photo app Stackables using a brighter version of its ‘Misty’ formula, which increased the out-of-focusness to the point that it didn’t matter. Another book set in the mid 1600s, Deborah Moggach’s story is of an artist who gambles on the crazed tulip market. I wanted the image to look as if it was of a painting of that time period.

The third tulip is a flame tulip, which resembles the Semper Augustus, a streaky red and white tulip that became the most extravagant tulip of this time, especially as the virus that caused the streaks made the bulb unstable. 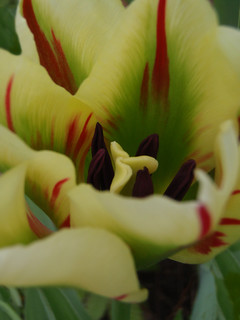 Here I made up my own formula in Stackables, adding lots of thick brushy paint stroke layers along with a handwriting overlay to make it look as if it was part of a tulip grower’s notes on how to produce the perfect tulip.