For years I have attended the Eastside Culture Crawl, an event that has grown to 500+ artists participating and over 30,000 people attending.

The event was always held in mid-November and my favourite place to ‘crawl’ was 1000 Parker St, an old mattress factory that had been converted into a warren of studios for over 250 artists.

When my husband and I started looking for a smaller place to move to, none of the places we looked at had any space for a studio and thus it became imperative to find a studio space.

My first choice was 1000 Parker St even though it was supposed to be almost impossible to find a space there. A visit to the building confirmed everything I was told: there had been no vacancies for several years; there was a waiting list of 20 people dying to get in.

I only wanted “a little space in a shared studio” I exclaimed. The manager took sympathy on me, telling me to put up a notice on the bulletin board, maybe something would come up. 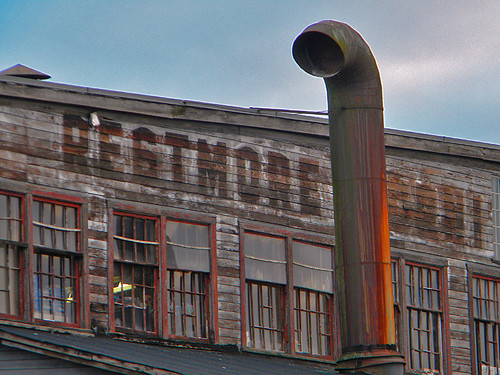 15 days later I got an email about a space in a shared studio! By the end of March I had signed on. This is it, just before I moved in. The red line marked the boundary of my 140 square foot space – I would be sharing the large space with seven other artists.

I moved in April 6th and started painting my heart out. Unfortunately, 20 days after I moved in, we started the major production of buying a new place and selling our old place. May, June and most of July disappeared in a blur and my new studio became the repository for everything that didn’t fit into our new apartment. When I finally surfaced in late July this is what my studio looked like, with barely enough room to move let alone paint.

My studio in late October after a massive attempt at cleaning it up in order to turn it into a gallery in time for the Eastside Culture Crawl.

One of our studio mates decided he wasn’t going to be showing at this year’s Culture Crawl so he generously offered up an area in his space to store everybody else’s stuff. That space was quickly filled to the brim, including my light table, rolling table and miscellaneous supplies.

A mass of learning curve experiences later my gallery was finally ready. This is from last night, the first night of the Eastside Culture Crawl! If you’re in Vancouver come and see me, I’m in Studio 218 at 1000 Parker St.

2020 Update: sadly my studio will stay its usual mess this year – today I got a email that the building is staying closed to the public due to COVID. No show this year. I suspected this; last year we had several thousand people coming through the studio.