When I was looking up Georgia O’Keeffe in Wikipedia I found this painting called Blue and Green Music that she painted sometime in-between 1919 and 1921.

from Wikipedia: Painted in her New York years upon the idea that music could be translated into something for the eye, Blue and Green Music is a work of rhythm, movement, color, depth, and form.

This reminded me so much of an electric turquoise river I saw while flying over Iceland combined with the coast of Denmark taken on the same flight.

Above is the river in Iceland, below the Danish coast. 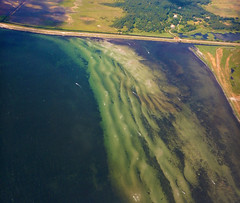 Then there was this oddball shot: a geometric shape, a road perhaps, somehow imprinted on the wind-blown snow on desert sand somewhere over the States on the way to Mexico. 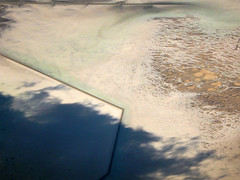 The combo image, inspired by Georgia O’Keeffe, is a collage of shots that I have called: Aerial Music from the Nordic Countries.