I’ve spent a fair amount of time playing around with sepia images in various photo apps as well as by using Photoshop layers. This is a collection of my favourites.

Pixlromatic does a good job on sepia images, leaving in a touch of colour and adding a bit of texture/character as in this bunch of grapes in the Rioja region of Spain.

‘Happiness’ is a Stackables formula which works quite well when applied to this rusty Mobulette.

I love the warm brown merging into a soft sea green in Stackables formula ‘Happiness’ but it also introduces a splotchy/scratchy texture. This texture worked on the Mobulette but not so much on this Yucca. The splotches can be removed by using the tool setting in the bottom right corner, and deleting the scratchy layers. 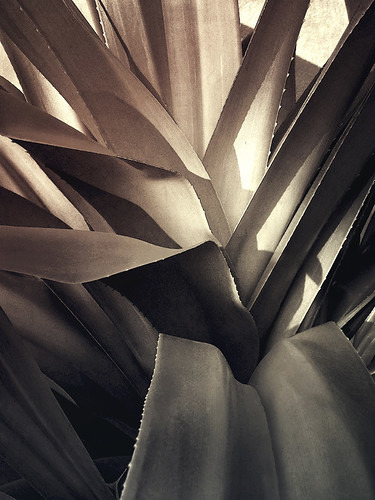 In Photoshop’s Black and White ‘Image Adjustment’, you can adjust the colours until the image has the areas of light and dark that you prefer. The ‘Tint’ button at the bottom has a default setting that turns the photo into a great sepia tone. This didn’t work that well with this image…

…but this heavily edited colour photo of boats in Vietnam was changed to black and white in Photoshop and the sepia tint added, and it worked like a charm.

Back to Photoshop where a favourite overlay converts the conservatory/art gallery into a sepia monochrome. I call this my grungy industrial Victorian monochrome of a conservatory in Madrid. I found this overlay, and lots more, at Rene’s Playing with PSP Textures Album.

Another version of the conservatory where I created with two overlays of scans from old books, both stained, one written in. I still prefer the overlay that I got online, sigh…