This is the third time I’ve tried to work with the rule of thirds. The first time I discovered that almost none of my photos qualified so I ended up working on some of my husband’s shots.

This time I found these skimboard surfers. Because I had no idea where they’d end up in the frame I pulled back a little more than usual and pressed the shutter when I thought I’d capture them.

This particular shot was uploaded to Flickr as is, without any cropping or thinking about the Rule of Thirds. 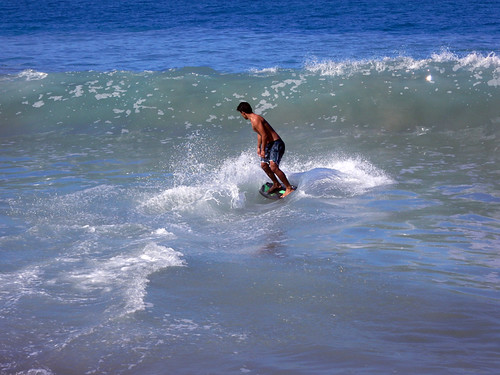 Cropping surfer shots in Photoshop using the Rule of Thirds is fairly easy as the program conveniently divides its cropping tool into thirds. The dotted dividing lines are quite faint here but if you click to enlarge they will be more visible.

I think this one looks better when using the ‘Rule’.

Normally I would leave space for the ‘moving object’ (surfer) to move into the frame, but in this case the interest is the splashy trail he leaves behind him, running right along the dotted 1/3 line of the cropping tool.

A third shot. In this one, the background divides neatly into thirds as well, being two thirds white water and one third blue.

I have mostly different shots of this fun-to-watch event on my Albatz travel blog.

4 thoughts on “Rule of Thirds, Take 3 (Skim Surfers in Mexico)”