Although they are distinctly different under the microscope they both share a certain ‘toughness’. This means that they both are easily carved without small pieces accidentally breaking off. And of course, they are both best known for their green coloration, although they also come in browns and off-whites in nature.

Nephrite is very strong and not prone to chipping; in early times it was known as the ‘axe’ stone for its ability to hew wood. Below is an adze with a jade blade and a bone handle; a type of small hand axe.

Nephrite often has a beautiful rich green tone with lighter shades run through it, and translucent so that it glows when the light hits it. This Nephrite jade is from BC, Canada, one of the major sources of Nephrite jade along with China and Russia. 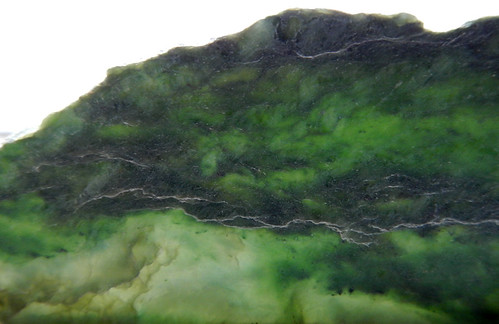 Like Jadeite jade, Nephrite carves well. This is an inexpensive piece of jewelry from Guatemala carved into the face of the Mayan god of corn. 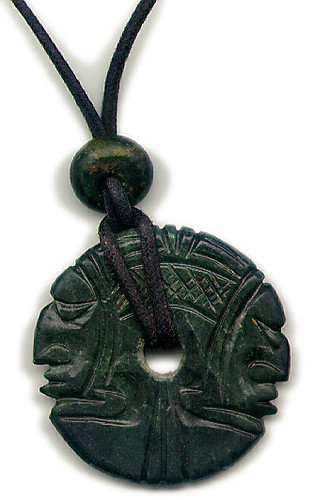 Guatemala also has Jadeite jade which is more of a blue green, sometimes run through with off-whites and browns. 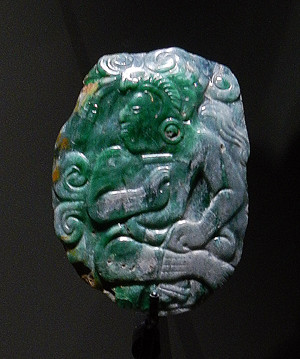 The Chinese valued jade so much its was the sign of royalty. Most of the early jade used was Nephrite but in the 1800s the discovery of Jadeite in nearby Burma caused the Chinese to switch their allegiance to the purer greens of Jadeite. Here a vender in the Jade Market in Mandalay, Myanmar which has 70% of the world’s highest quality jadeite, shows off some of his valuable stones.

An inexpensive ‘white’ jade from Myanmar. 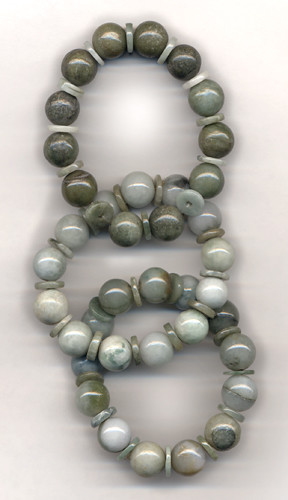 An example of ‘white’ jade from Guatemala.