Since I’m into doing diptychs and triptychs I thought I try out a few featuring the colour of April.

In March the colours are fairly consistent, lemon yellow, spring green, various shades of pink and white against a dark sky which I love – there is also purple combined with yellow which I hate, although crocuses always make me smile.

In April the colours of March continue but new colours are added to the mix. ‘Red’ appears in gardens in the form of tulips and late camellias.

The azaleas come out, and towards the end of the month the super-fragrant orangey-yellow ones arrive. Triptychs are harder than they look; I had a lot of different azaleas but with all the different types of light they didn’t work together the way I thought they would.

Speaking of fragrance, April seems to be the most highly scented month out there, which makes the air colourful as well. And then there’s the cherry blossoms, showing up in early March but at their height in Mid-April. Here is my personal nemesis which I call ‘Demon Crow’, with cherry blossoms in the background asking me, “Are you still there? What are you looking at???” 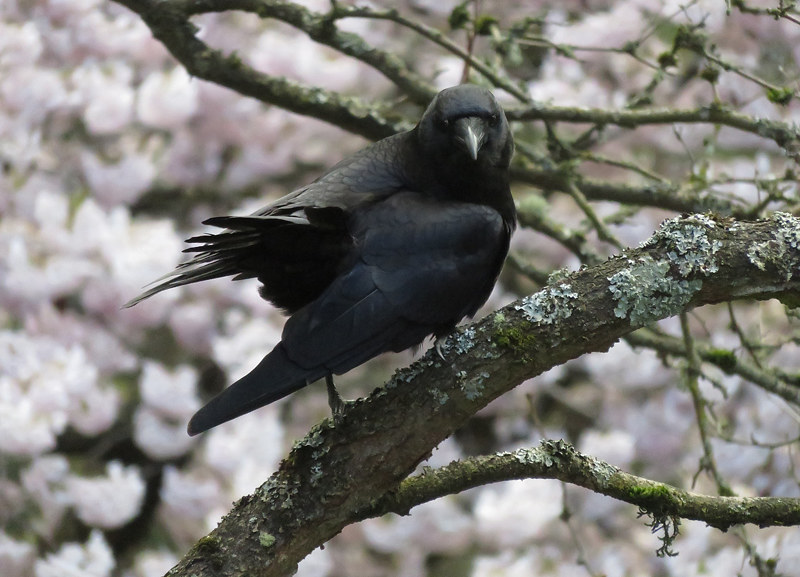 Here he is patrolling my deck in between haranguing me about messing with HIS deck. I guess I would define him as a colourful character, although I’m not too happy at the way he flings all my newly planted herbs out of their pots to make way for him to bury the peanuts that some evil person is feeding him! 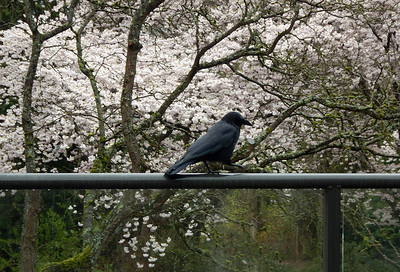 On Monday, the 12th, I headed to Queen Elizabeth Park, mostly to find some more delectable bark textures for my ‘other’ diptychs. But there were of course dozens of huge old cherry trees in full bloom and they were packed with people, having picnics, grabbing a few ZZZs, and taking photos.

In another large grouping of trees down by the street was a bride, in soft white with deep pink roses in a slightly darker version of the exact shade of the cherry blossoms. I could see buying a wedding gown and being photographed under the trees for an April wedding, but there were at least five other women wearing filmy pink gowns posing underneath the trees. I couldn’t imagine buying a gown just to be photographed under the trees, but they certainly would have made great shots for their photographers. 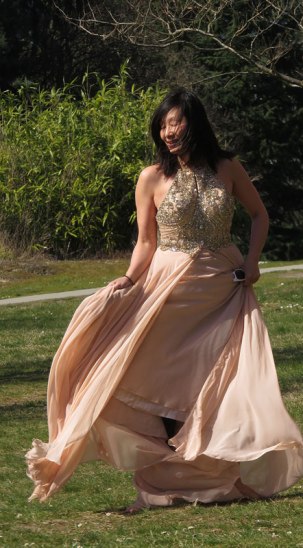 And speaking of colourful characters all dressed up there was this guy. I see that, like me, he was more interested in tree bark than cherry blossoms. And, unlike most of the others in the park, he was actually wearing a mask.

He also makes his own jewelry which he showed off, and he’s on instagram @spikiepup if you fancy taking a walk on the wild side! 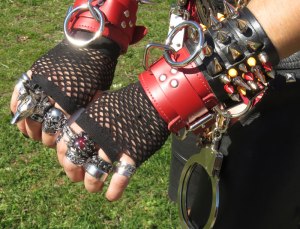 14 thoughts on “The Colour of April”