In a small Coal Harbour park someone added fresh flowers to this bronze statue of an old woman sitting on a bronze bench clutching her purse. 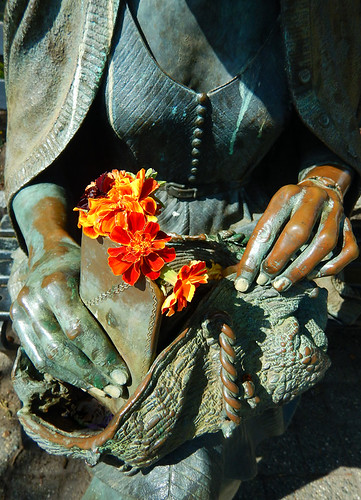 A little further on from the lady I spotted this fountain of bronze Maple leaves layered one over the other just like they do in the autumn. I like the fact that the bronze has turned green in some places and red under the water, perhaps algae? 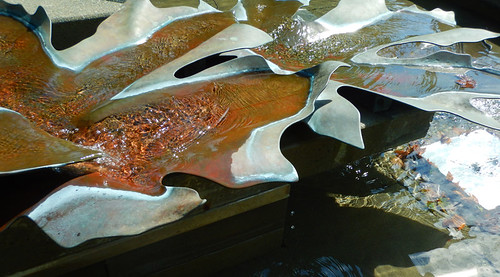 Another view of the same fountain, which ran underneath a planting of maple trees. 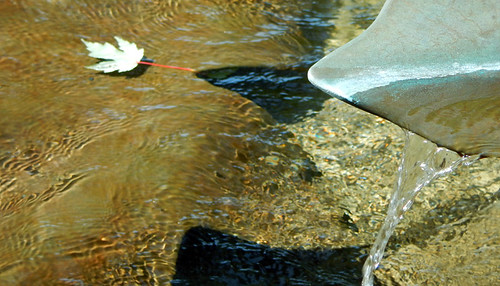 Across Georgia St an extensive mural of white magnolias was painted on a plywood hoarding next to a new building. Each magnolia has been deconstructed into stripes of the various colours from that section, and the entire mural was gorgeous. Because it is on plywood I suspect that it isn’t permanent, although there was a similar mural underneath the water feature, unfortunately so reflective that I couldn’t capture it. Drew Young is the artist. 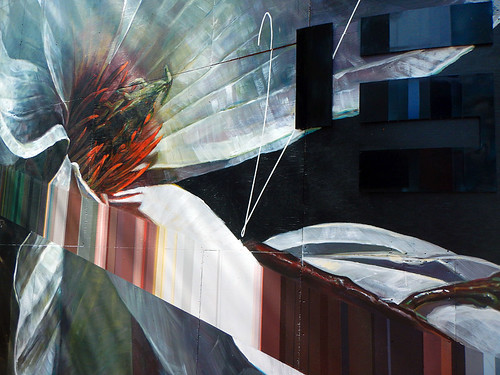 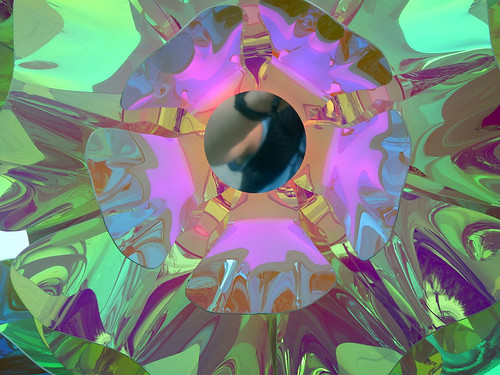 ‘Pedestrian Protest’, the name of a large photo installation on the offsite Vancouver Gallery exhibition on Georgia St.

Manhole cover in downtown Vancouver with a circular Haida design of swimming salmon. 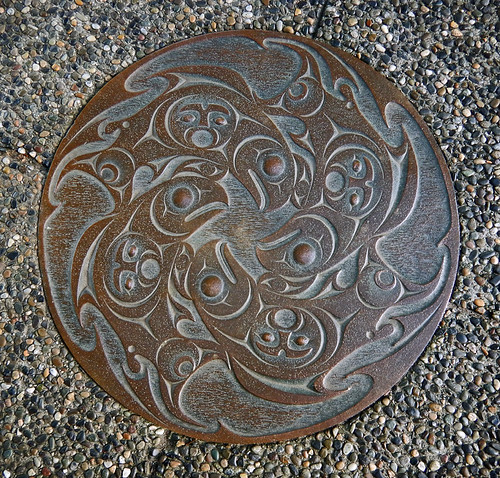 In June 2020 pop-up patios appeared near cafés and restaurants all over the city. The city blocked off sections of streets, back-alleys and parking with concrete barriers to separate the patio from traffic, and artists were often commissioned to paint murals on walls and the concrete to make the patios more inviting. They are still pretty active in late 2021 – this one is in Yaletown. 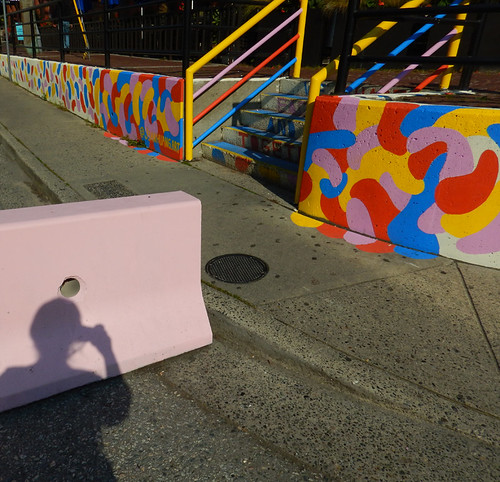 Tall pillars supporting the entrance way to a high-rise near downtown, each pillar with a tiled mural of people. 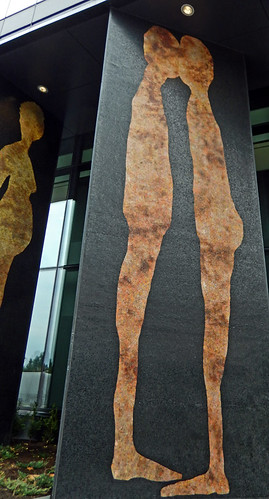 Giant feet of a laughing red man on Vancouver’s Seawall framing a small segment of False Creek with a small ferry passing by. 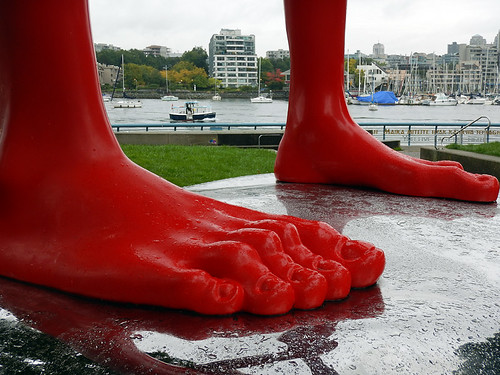 Laying-out the vinyl for the 3D mural called ‘VOXEL Bridge’ underneath the Cambie St. Bridge. Part of the Vancouver Biennale it is designed to exist simultaneously in three worlds. Find the explanation here: https://www.vancouverbiennale.com/artworks/voxel-bridge/

Silvery mountain mural on the storefront of the new Mountain Equipment Co-op (MEC) in Vancouver. 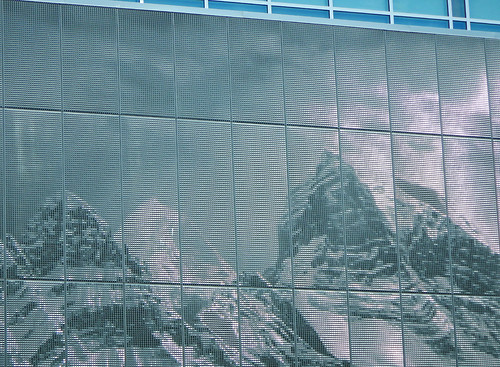 Over to Main St which has benefited from the Vancouver Mural Festival with a cumulative mass of murals starting back in 2016. 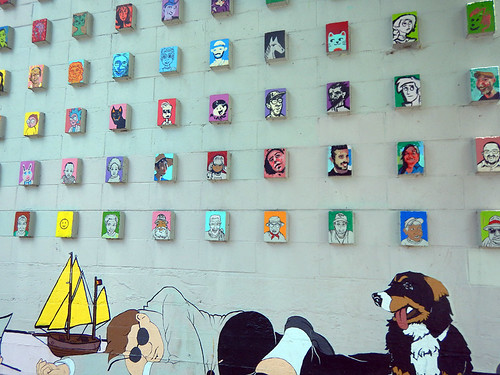 Mural on a back alley wall just off Main St. of an octopus clasping a plastic water bottle with a ship inside. 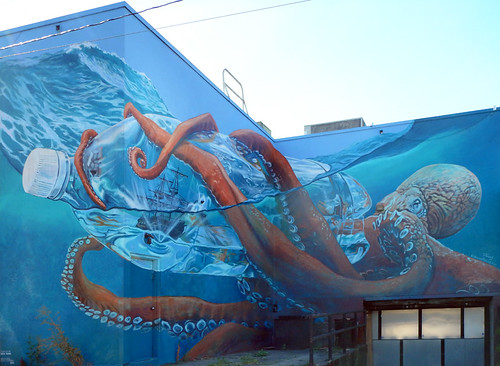 The mask makes me suspect that this mural is one of the newer ones. 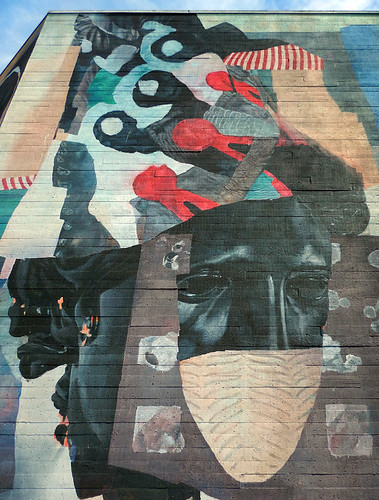 Not all of the murals are done by professional artists – I just love this mural of a shark on the shingled wall of a nearby garage. 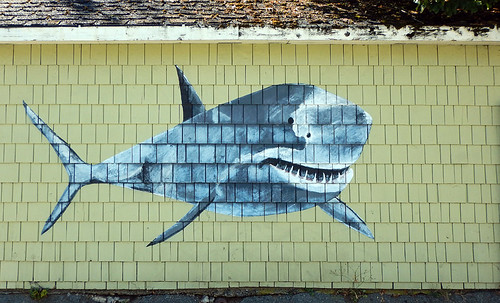 A ‘petal gate’ of a yellow flower frames the entrance of a community garden on the Vancouver’s Eastside. 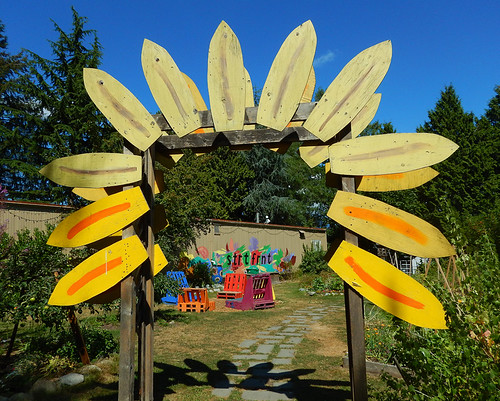 Sculpture of a multiple chairs placed in a variety of configurations, each one with different sayings cut into them. The raindrops are from a wet day at Kitsilano Beach. 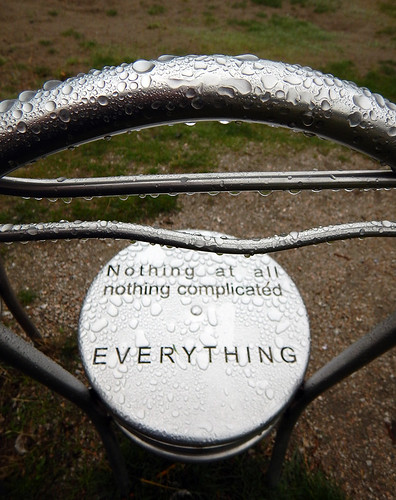 Mural in a Bee Garden in a spare lot in the industrial area between Granville and Burrard. 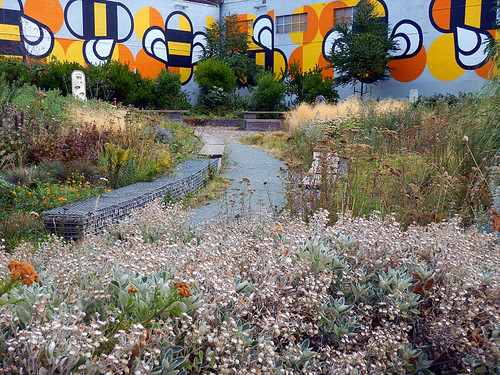 The Capture Photo Festival has a show of large photos on billboards that run along the Arbutus Greenway near Fir St. The billboards are changed fairly frequently, and have occasionally had mixed reactions to some of the photo subjects.

Lit-up LED sign in front of a hedge in Point Grey road that tells a story if you’re patient enough to wait for it. 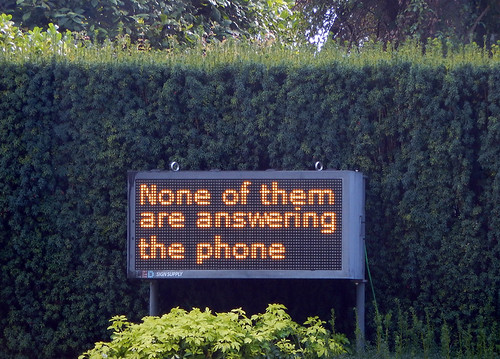 I have to go back and wait for the rest of the story. 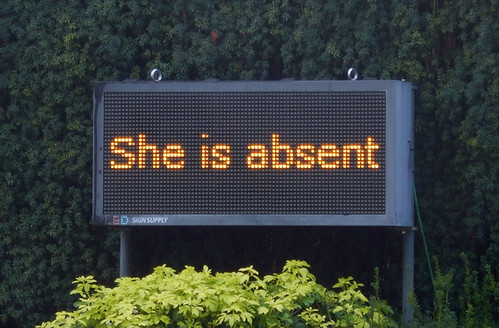 An art show affixed to a chain-link fence around a tennis court at a public park on 4th Ave. 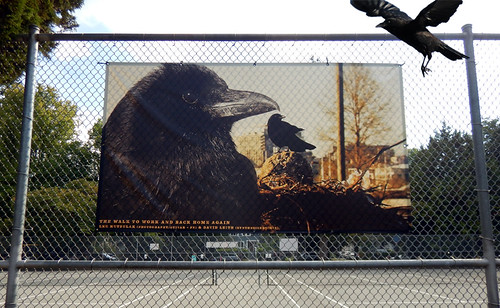