In April a friend of mine studying photography had an assignment in her first-year course to take a magazine-type portrait of someone at work, using two types of light, available light and strobe-flash. My messy studio and I were her choice.

Her only instructions to me were, “Don’t clean up your studio, and don’t wear white.”

“What about wedding photographers?” I asked.

“That’s why they make the big bucks,” she answered.

I do remember something similar when I was taking classes in photography in the days of film (eons ago). The instructor, a professional photographer, had just finished doing a catalogue shoot of the latest summer clothing line where “everything was white”.

He told me that white was difficult to photograph as the exposure had to be perfect, a fine line between making it bright enough to look like white but without the details being blown out.

A week after I had my portrait taken, some big old cherry trees near us were in full bloom, delicate pink double blossoms under a brilliant blue sky. 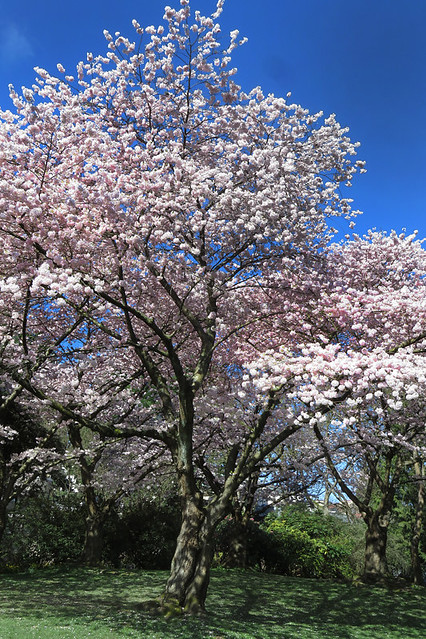 I could see people coming around the curve and stopping dead. No one could resist taking a photo of these glorious trees. 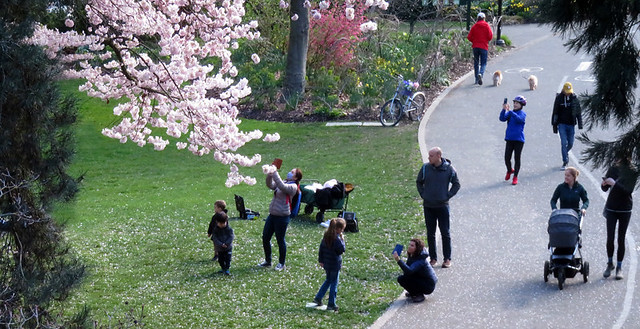 It looked like a perfect place and weather to do some wedding photography. And it just so happened that there were three photographers, a makeup person, a dresser and two models, both wearing white lace standing under those magnificent trees. I’m assuming here that these were second- or third-year year students in the same photography course as my friend. 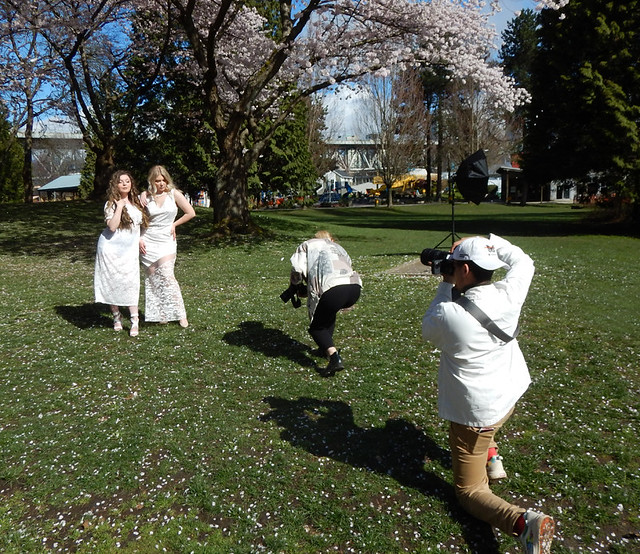 But there were a few problems. The old perennial white-burning-out problem (here both the photographer and model are wearing white and the highlights are totally blown out); the dappled light and shadow which is difficult to work with under most circumstances; and finally, the trees were just too big, all you could see was their bare trunks and the only hint that they were cherry trees was a few scattered petals on the ground. 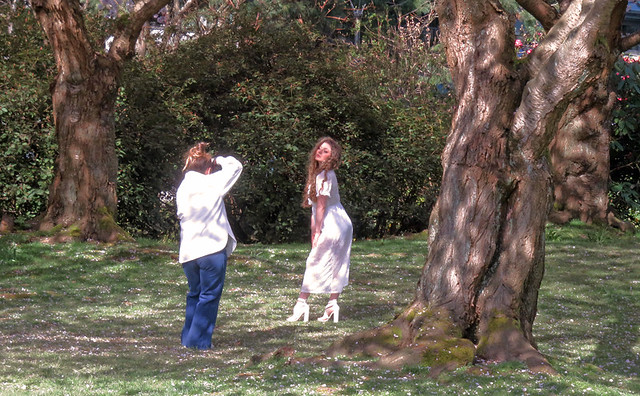 Wanting to be unobtrusive I was using two different cameras here, my little camera with only five times zoom, and a second camera with a big zoom. My little camera seemed to be way better at capturing the natural colour of the light, as seen in my first shot of the photographers in action. 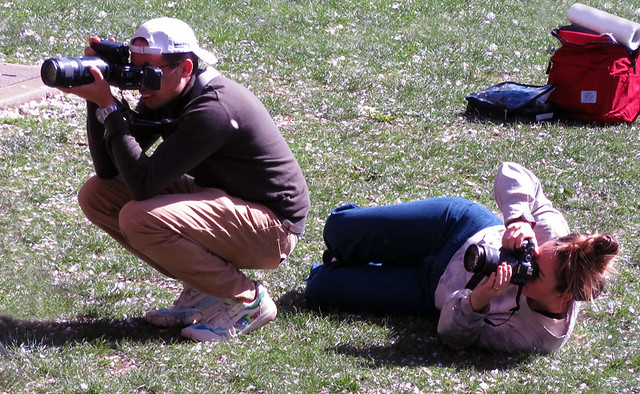 I had a big advantage over the old ‘film’ days in that I could see how the light was captured on both camera screens, and spent ages adjusting the larger camera so that it came close to matching the lighting captured by my smaller camera. Success! 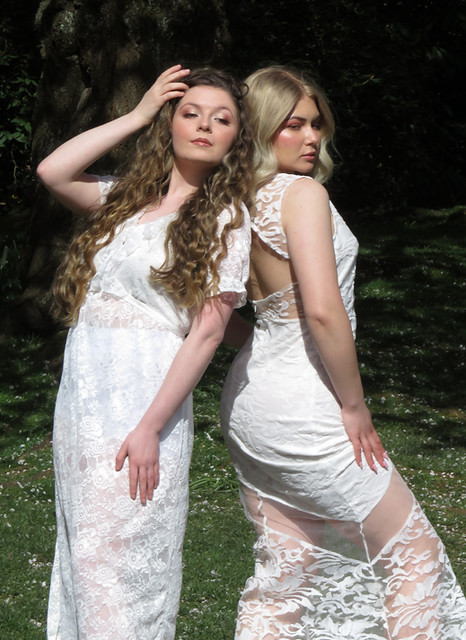 I wandered away and took some other photographs of the spring flowers. When I looked back I caught a glimpse of someone wearing white up in one of the big trees. I thought, ‘Don’t tell me they got the model to climb the cherry tree. And in those shoes!’

It turned that one of the photographers had shimmied up the tree to get hold of some cherry blossoms, and by the time I got back was busy arranging the flowers in the model’s hair. And having turned off my big camera, the damn thing had reverted back to its default settings and was again doing a crummy job with the light. 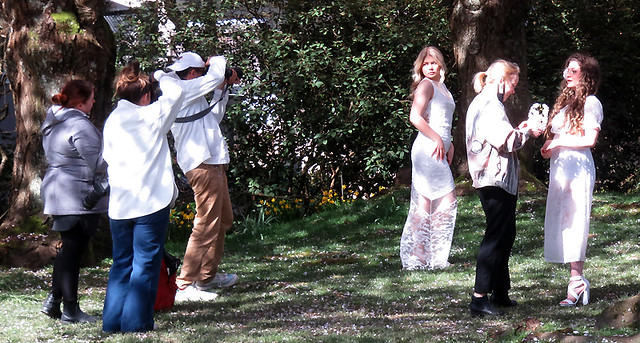 After a lot of fiddling with the settings this is final result, the highlights only slightly blown out. It helped with the exposure that the photographers had given up trying to photograph the models under the trees and had instead moved them in front of a dark wall of greenery. I suspect this portrait would have pleased a bride no end, and showed me how much thinking and creativity had to go into working with the light that had been handed to you on the non-changeable day of someone’s wedding. 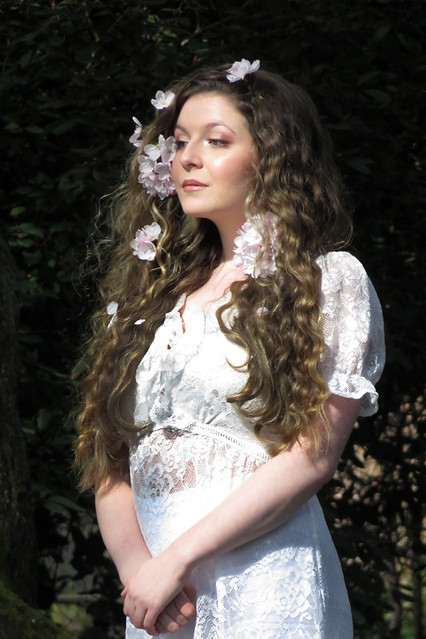 #rocks #stones #transparent #fluidacrylic #diptych #vancouverartist #texture
Last week I took a photo of a #scraped #metal #garagedoor which #lookedlike a #shrieking #rabbit. This week it is the #ChineseNewYear and also the #YearoftheRabbit. I thought I would dress him up in a #redsilk #jacket but in the end I layered him with the #Chinesejacket that was worn by a politician. #gongheifatchoi
%d bloggers like this: