Fleurs de Villes is a series of floral displays in various cities around the world. In Downtown Vancouver, June 11-20, 2021, a display called Rosé was set up in support of breast cancer research took place.

The signature image for ‘Fleurs de Ville: Rosé’ on a set of double doors on Robson Street. 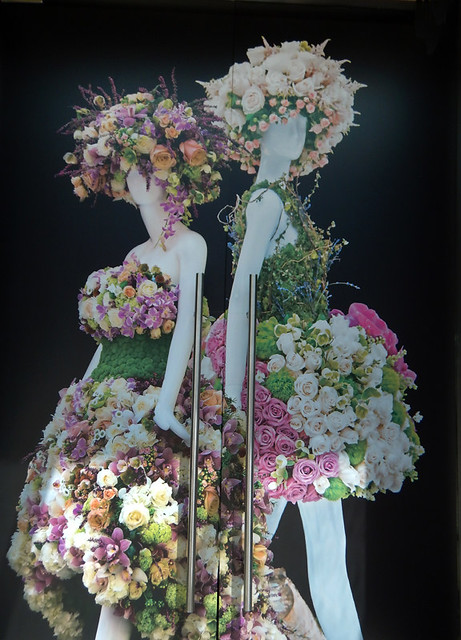 A floral walk of various pinks had mannequins galore dressed in gowns of pink flowers. 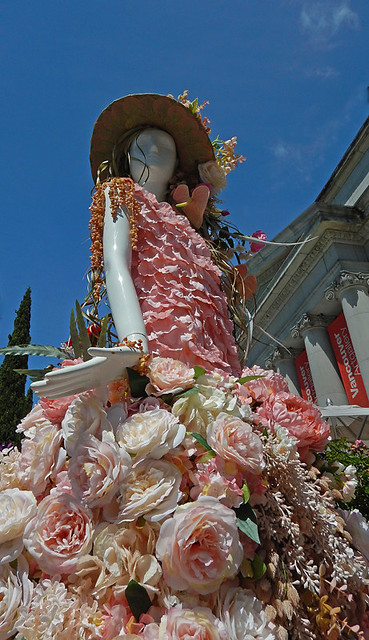 They were a bit tricky to take photos of, partially because the backgrounds were mostly glass that reflected cars, signs and other urban flotsam which kind of ruined the mood. 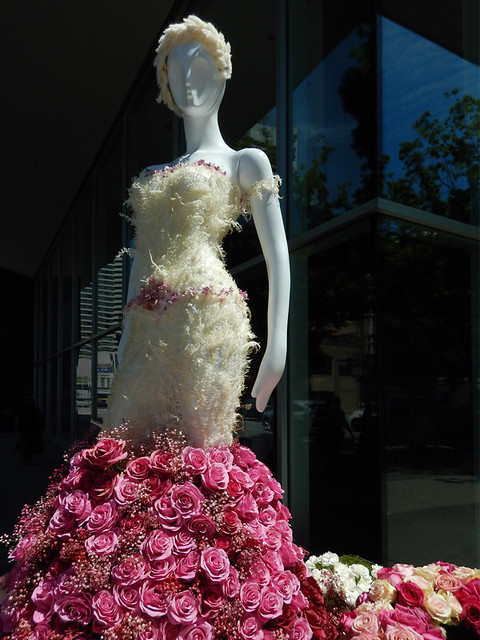 The other problem was that an Instagram prize of $700 had been offered, and so there were a lot of young women dressed to match who spent ages taking selfies while posing among the pink. 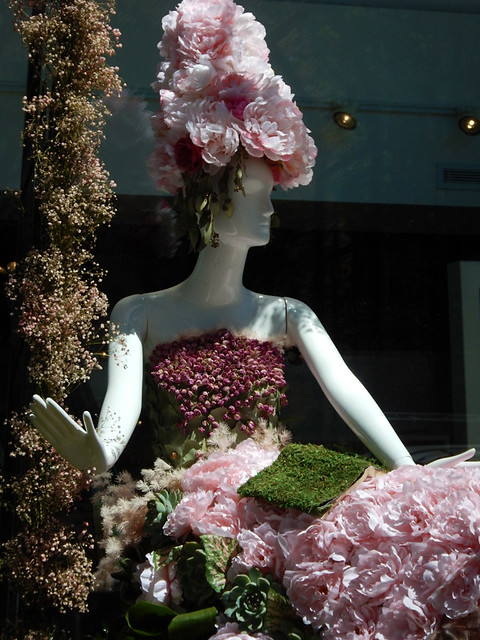 It had never occurred to me to dress up to match the flowers – but not the women running around the displays looking for the perfect Instagram moment. This one was one of the few I actually photographed posed next to a pink bicycle adorned in flowers. 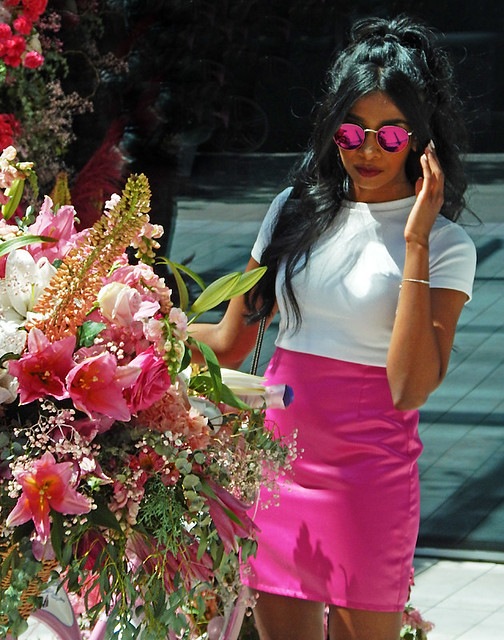 My friend who accompanied me was certainly more in tune with the flowers than me – here she is sitting in a decorated bus stop wearing a delicate pink floral embroidered blouse pretending to take a selfie with her perfectly matched phone. (My annoying reflection, wearing a dull grey-blue shirt, is in the background along with the annoying traffic.) 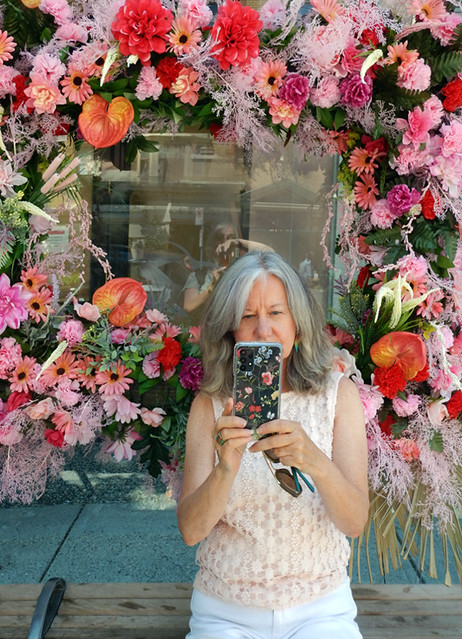 We were a bit disappointed as many of the flowers were fake. 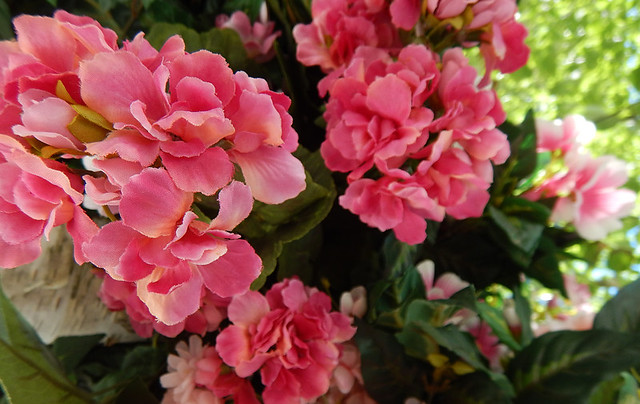 However, close-ups of the real flowers showed that they were often a bit tatty, especially after 9 days in the sun. Here are a couple of artists going about refreshing the fresh flowers for the upcoming weekend. 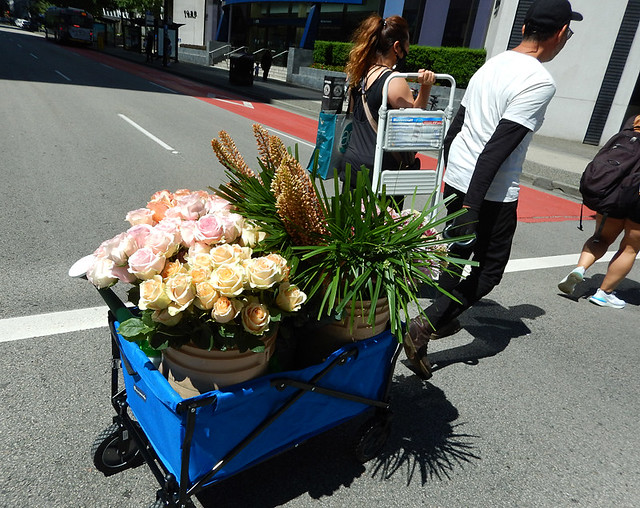 These fresh peonies were not part of the display but rather for sale in a small flower stand nearby. 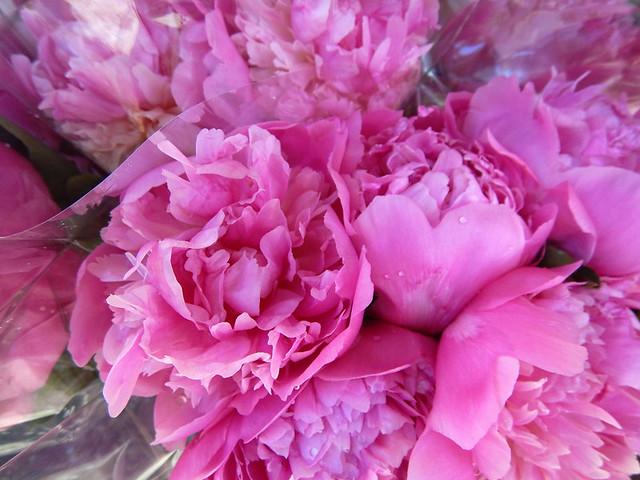 At the end of our floral tour of course we had to stop for some Rosé wine! — at the Homer Street Café — and they had a French-inspired charcuterie as an accompaniment for the wine. 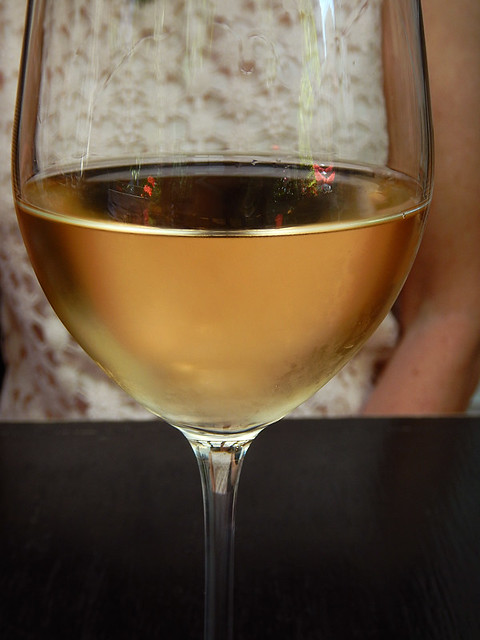 An interesting note: Earlier in the year at a local park I had run into at least six groups of women dressed in filmy pink gowns posing among the cherry tree blossoms. It seems that everyone is out in search of perfect Instagram moments!